Zoe Saldana hit the red carpet at tonight's Academy Awards in a gorgeous and on-trend pale gray and black gown by up and coming French haute couture designer Alexis Mabille. The 35-year-old is a fairly recent inductee into the über-elite group of haute couture creators, of which there are fewer than 20 in the world (think: Chanel, Dior, Givenchy, and Jean Paul Gaultier). He launched his house in 2005 with the help of his family, and with a unique twist: the collection was unisex, containing designs that aimed to flatter both men and women alike. We certainly think it flattered Saldana —congrats to the designer on his big Oscars debut! 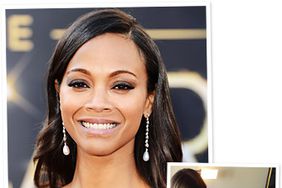