At tonight's CFDA Awards in New York City, Oscar de la Renta will be presented with the Founders Award by pal and frequent de la Renta dresser Hillary Clinton. This is one of the most prestigious honors in the industry, so we're offering our early congratulations for the 80-year-old designer. The Founders Award—given in honor of Eleanor Lambert, who founded the Council of Fashion Designers of America in 1962—recognizes people who have made their mark on the fashion world. De la Renta certainly has done that throughout his 45-plus year career, both on and off the runway. In addition to his romantic and feminine designs being a red carpet staple for Hollywood heavyweights Sarah Jessica Parker and Jessica Biel, he also helps usher in a new class of Oscar Girls, like Jessica Chastain and Allison Williams. Off the carpet, de la Renta also is a devout supporter of the arts, serving on the boards of several organizations, including The Metropolitan Opera, Carnegie Hall and the nonprofit New Yorkers for Children. Click to see who is loves the designer's looks. 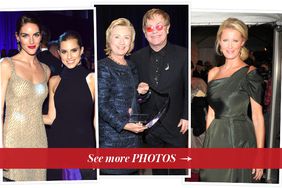