Oprah Helps Beyoncé Premiere Life Is But A Dream, Plus More Parties!

No last names were required last night when Oprah came to support Beyoncé at the New York premiere of the singer's upcoming HBO documentary, Life Is But A Dream. Beyonce (in Elie Saab) both stars in and directed the documentary about her life and the making of her 2011 album, 4, which premieres this Saturday, February 16, at 9 p.m. on HBO. The pair also filmed an interview together for Oprah's Next Chapter, Beyoncé's first since the Super Bowl, which will also air that night, at 8/7c on OWN. (Get a sneak peek at the sit-down here!) 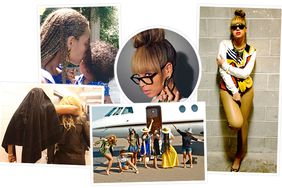