The photo featured the power couple smiling for a bathroom mirror selfie, with Wilde's arms wrapped around her man, who turned 41 on Sept. 18. "Old pic of this old couple," she captioned the photo. "Happy Birthday to my best friend, my favorite co-pilot on how-the-hell-do-you-raise-a-kid airlines, the greatest karaoke buddy known to man (or woman), the funniest, loveliest dude I've ever met, and much, much more. I love you."

Can you even take the cuteness? The couple, who got engaged back in January of 2013 have a 2-year-old son, Otis Alexander, and are expecting their second child in a few months. Although they have been engaged for more three years, the couple isn't in any rush to tie the knot. During an appearance on Watch What Happens Live in April, Sudeikis joked about the one thing that could finally get them to the aisle: "We are good in many many ways," he said. "I believe that we won't get married until weed is legal in every state, gosh darn it!"

Married or not, clearly the duo is still head over heels for each other. Happy birthday to Jason, we hope it's a great one! 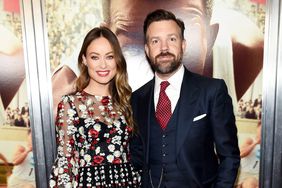