Things are unraveling quickly on Scandal! As Olivia Pope (Kerry Washington) struggles to hold it together, her tight-knit crew of crisis managers faces some serious predicaments of their own on tonight's all-new episode, aptly titled, "Spies Like Us." Abby, Huck, Quinn, Harrison—whose secrets will be revealed? Pope goes into investigative mode and costume designer Lyn Paolo told InStyle.com that she outfitted Washington accordingly in a sleek Diane von Furstenberg blouse and the same Tory Burch trench coat she’s worn since the pilot. “Both Kerry and I felt that we should work her trench into the spy story line,” Paolo said. “We went with a blouse-and-pant combo as opposed to our usual suitings, more of an undercover look for her.” See who gets ousted tonight on Scandal at 10 p.m. EST on ABC.

Plus, see our all of our favorite TV shows. 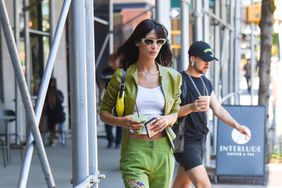