Here’s Why Olivia Munn Turned Down a Role in Deadpool

Ryan Reynolds’s punchy anti-superhero spinoff Deadpool was a box office hit, but there was one reason why Olivia Munn turned down a part in the film: She didn’t want to be “the girlfriend.” The X-Men: Apocalypse star told American Way Magazine that she wanted to fight instead.

“I said, ‘Is there a fight scene?’” Munn says of her discussions to star in X-Men: Apocalypse, worried that her role as Psylocke could involve too much talking and too little action. “I thought Psylocke was always one of the most lethal characters, and I said, ‘Yes, as long as you’re not using her to be the eye candy. She has really powerful abilities,’” she said of taking on the part.

Munn wants to succeed in Hollywood, but she’s doing it her own way. The actress made it clear she won’t take a big box office role if it means sacrificing her happiness, which is why her next venture is taking her behind the camera. Munn is working on a deal to executive-produce a CBS series about a female sportscaster in the 1970s.

Watch this butt-kicking, go-getter in action when X-Men: Apocalypse hits theaters May 27. 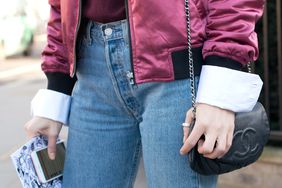