Who isn't obsessed with How to Lose a Guy in 10 Days?

It's been well over a decade since the romantic comedy won us over, but Kate Hudson's portrayal of Andie Anderson seriously still continues to inspire. Just ask 24-year-old actress and red carpet darling Olivia Culpo.

On Monday in L.A., Culpo arrived at the 2016 InStyle Awards in a shimmery gold sleeveless Galvan dress that we think deserves the camera-ready gold prize. For the A-list affair, the brunette paired the floor-grazing frock with a rectangular black clutch, a minimal selection of rings, and a bold red lip. So where, exactly, did she turn to for inspiration? Culpo cited How to Lose a Guy in 10 Days as her inspiration. Specifically, she's referring to the epic scene in which Andie attends a diamond-fueled party with Matthew McConaughey's Benjamin Barry. "Frost yourself!" right?

And while it would be unfair to decide who wore the look best—both Culpo and Hudson look flawless in their unique versions—, one thing's for sure: Culpo killed it. 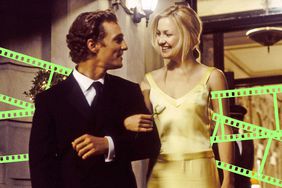