Octavia Spencer's Reaction to Meeting President Obama Is All Of Us

It's not very often that stars themselves get starstruck, but that was definitely the case when Octavia Spencer ran into POTUS at the White House yesterday.

The cast of Hidden Figures stopped by the First Family's home for a private screening of the upcoming film hosted by First Lady Michelle Obama, and Spencer, who plays a main role in the movie, couldn't contain her excitement when President Barack Obama made a surprise appearance. The White House shared an image from the event on its official Instagram account today, and in the snap, the actress has an extreme look of shock and excitement on her face.

"That face when the President drops by for a visit," the caption hilariously said. "Today, the cast of Hidden Figures visited the White House to highlight the stories of Americans who defied stereotypes and broke glass ceilings to advance human space flight, science, and innovation."

Spencer's co-stars Taraji P. Henson, Janelle Monáe and Kevin Costner were also in attendance for the event, where they all spoke on a panel about the film, which tells the story of three black female NASA engineers and mathematicians who helped launch astronaut John Glenn into orbit. FLOTUS also spoke after the screening, and called the project both "remarkable" and "important."

Talk about a true fangirl moment. 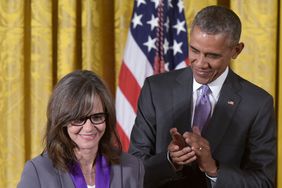