Though many of us would rather spend our vacation lounging by the pool and the enjoying the perks of doing absolutely nothing, the Obamas have a different M.O.

In fact, when it comes to relishing in their time off, the family of four prefers to dial up the adventure notch. That’s what’s happening in Bali, Indonesia, where they reportedly arrived on Friday and didn’t waste any time posing for Instagrams or checking out their guidebooks. Instead, Barack, Michelle, Malia, and Sasha put their protective bright yellow hats on and went white water rafting down the Ayung River.

Naturally, Mr. and Mrs. Obama sat side by side sporting dark-tinted sunglasses and, not surprisingly, super athletic arms that show off their skills. Their daughters sat in front of them and seem to have caught a glimpse of the paparazzi taking their pictures nearby.

According to the Associated Press, the foursome has visited Ubud, an arts and culture center situated between hills, and plan to visit Borobudur, a Buddhist temple that dates back to the 9th century. The trip is actually a homecoming of sorts for Barack, who moved to Indonesia in 1967 at age 6 before returning to Hawaii at age 10.

How many dad jokes do we think he’s made while showing his family his former home? We’ll let you decide. 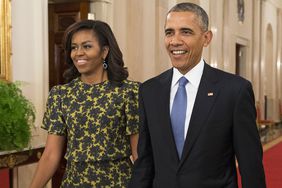 What the Obamas Did Next 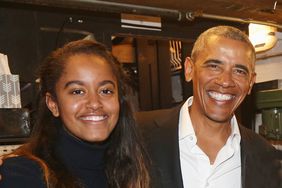 The Obamas Are Back—and Hitting Broadway 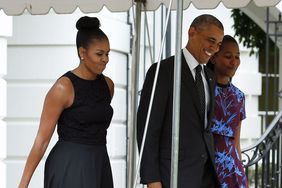