We're in the last weeks of summer (say it ain't so!) and even the First Family is headed for some needed R&R. Yesterday (Fri, Aug. 7), President Barack Obama and his family headed to Martha's Vineyard, Mass. for their annual family vacation. It's actually a familiar spot for the Obamas—it's the sixth time the President has vacationed at Martha's Vineyard. They returned to the same seven-bedroom, nine-bath, 8,000 square-foot rental home in the Chilmark neighborhood that they stayed in last year. The home also reportedly features a basketball court and infinity pool.

The President wasn't in swim shorts quite yet though. He donned a sleek simple black suit with a white button up shirt for the walk on the tarmac, topping it off with a playful black tie dotted with white dots.

Michelle Obama, perfectly walked the line between polished and "ready for a vacay" in a black summer dress with a lace hem. She completed her look with shiny black flats and wore her hair in a tight bun.

And it looks like their daughter Sasha is all grown up! Clearly, she's inherited Mom's savvy fashion sense. She stood out in a purple and blue patterned summer dress with chunky white sandals. The touches are in the details of course: Sasha chose a simple gold necklace and tied her hair in a loose ponytail. Now if only summer could last forever... 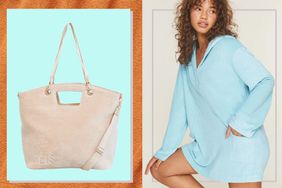 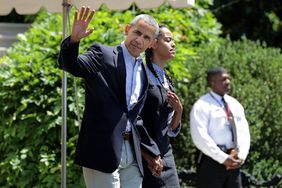 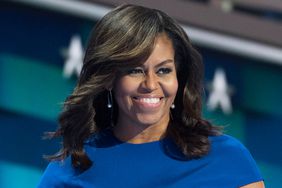