North West is finally ready to bestow the perfect moniker onto her adorable birthday puppy.

Mom, Kim Kardashian West, who has a definite soft spot for the family's new furry addition, took to Twitter just after midnight on Tuesday to share, that after a few days of pondering, little Nori has come up with a cute albeit unusual name for her fuzzy friend.

"FYI the puppy's name is sushi," the reality star wrote alongside an emoji of the popular Japanese entree, confirming that her oldest child—who turned four earlier this month, and was gifted matching poms with cousin Penelope Disick before the pair's joint Moana-themed party over the weekend, had finally decided to name her new dog.

Penelope, who turns five on July 8, had already named her identical puppy, Honey, a few days ago.

North West Got the Cutest Bday Gift—Guess What It Is?

We're still guessing the origin behind North's unexpected pick—could it have something to do with the cousins' obsession with all things ocean-related, considering this year's Moana party and last year's mermaid birthday bash? Either way, it looks like little Sushi has officially found her forever home! 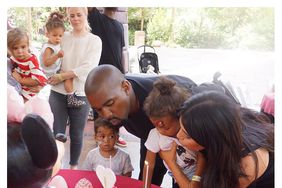