Sunday was International Women’s Day, a day the UN designated in 1977 to recognize women’s achievements as well as their rights. There was plenty of buzz about the day in the news and social media, and even Emma Watson hosted a Facebook chat on gender equality in its honor. But today, however unfortunately, is Monday. As you get ready for work, and you make that mental to-do list of the day’s tasks that need tackling, it’s easy to forget the conversations had and awareness raised less than 24 hours ago. Marilen Coughenour is here to help you remember all year long.

As the president and founder of the recently launched nonprofit Fash United, a United Nations Trust Fund partner that aims to unite the fashion industry in ending violence against women, keeping the issue top of mind is a challenge she knows all too well. Consider how, according to the United Nations Office on Drugs and Crime, 1 in 3 women will experience violence in their lifetime—not all of them will speak up, if they can at all. “We’re here to help with prevention, providing assistance, stop human trafficking—there are a lot of elements to the campaign, and our goal is to work with fashion designers and retailers to hold events where we can not only raise awareness but raise funds,” Coughenour says.

We recently caught up with Coughenour for more details on the nonprofit, why she chose the fashion industry as a partner, and what we can to do help.

Why partner with the fashion industry to stop violence against women?There’s a couple of pieces related to the cause. First, unfortunately, the industry has experienced a variety of different individuals and companies claiming to be modeling agencies who are not, and that’s tied to the unfortunate circumstances of human trafficking. Secondly, with the supply chain in the fashion industry, apparel specifically, there have been instances of forced labor. On the positive end, it’s an industry that has predominately employed women, and also an industry that has such a large customer service base of women. So what a wonderful opportunity to unite, influence, and mobilize the women not only employed by the industry, but who are also customers of the industry, to create change.

What has response been like since you launched in December?It’s been very, very positive, which has just been so rewarding. I’ve been meeting with a variety of different retailers, designers, and celebrities and people want to help. They just need to be asked.

One way you can help through Fash United is shopping products like t-shirts and bracelets (like the one Nicole Kidman is wearing above) whose proceeds support the cause, but what are some other ways people can help?We do have our website set up to receive online donations, and if shopping may not be something that a supporter can always do, which is completely understandable, on the 25th of every month we recognize the color orange, which is the designated color of the end violence against women campaign.

Orange Is Officially the New Black for Spring: Shop the Color Now

Why orange?That color was chosen to symbolize a brighter future without violence. It has been associated with positivity and brightness.

What’s the biggest misconception people have about the issue of violence against women?The first thought that comes to my mind is related to human trafficking, only because I know from speaking to folks that people have the misconception in the U.S. that human trafficking is not happening here. One of the UN statistics states that the human trafficking industry brings in $32 billion annually—that’s not only sickening but it’s staggering. There is also a misperception that violence is only occurring to a certain demographic or a certain socio-economic population, but it really is impacting every economic status. 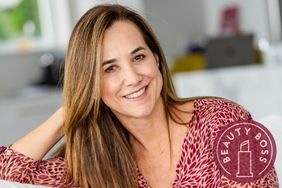