Expect to see lots of Nike this year on the grass courts of Wimbledon, the famed tennis tournament which kicked off today in England. Maria Sharapova, who took the 2004 title, collaborated with the athletic-gear giant on her Lawn Rose Dress (left), which was inspired by English rose petals. And defending champion Serena Williams will be wearing the Control Lawn Dress (right) as she goes for a back-to-back win. Inspired by strawberries and cream (the tournament's signature snack), the dress features feminine accents like pin tucks on the skirt and a softly squared neckline. Both dresses feature Nike's patented Dri-FIT technology, so no matter how much they sweat, Sharapova and Williams can look hot and keep cool. 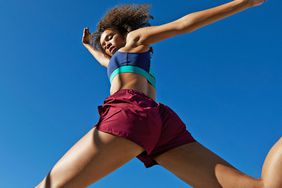 Amazon Shoppers Are Giving Up Lululemon for These "Flattering" $25 Shorts