It’s no revelation that Nicole Kidman has been through a lot both personally and professionally. After 35 years in show business and two widely publicized marriages (and one brief engagement), it’s fair to say that the 50-year-old has the life experience necessary to slay any role thrown her way—and with an Oscar, four Golden Globes and an Emmy, she hasn’t disappointed.

In the July issue of Tatler, the mother of four opened up about a far less public aspect of her life: her failed pregnancies.

Kidman, who shares children Isabella Jane, 25, and Connor, 23, with ex-husband Tom Cruise, and daughters Sunday Rose, 9, and Faith Margaret, 7, with country crooner husband Keith Urban, suffered an ectopic pregnancy at the beginning of her 11-year marriage to Cruise and a miscarriage toward the end.

However, Kidman explains that even great loss is not without its silver linings: "The flipside of going through so much yearning and pain to get there is the feeling of 'Ahhhh!' when you have the child."

The famous Australian hasn’t slowed down a bit since her award-winning turn in HBO’s Big Little Lies. She has five projects in the works throughout this year and next, not to mention the long awaited second season of the critically acclaimed series. 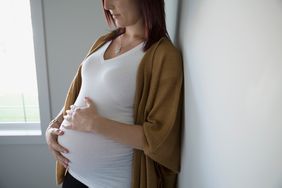