While Superstorm Jonas blasted the East Coast over the weekend, another Jonas storm was brewing in Park City, Utah. Indeed, Nick Jonas arrived in town for the Sundance Film Festival to promote his powerful fraternity hazing drama, Goat, which premiered on Friday night at the Library Center Theatre. And it was double the Jonas: His older brother, Joe, joined Nick to celebrate his little brother’s role in the violent, fratty indie. Almost immediately, anywhere the Jonas Brothers went, a crowd of young girls followed, wielding selfie sticks and iPhones, ready for a snap should the opportunity present itself. It became so prevalent, it was like Friday and Saturday turned into a game of “Where Are the Jonas Brothers Now?”

The flurry started on Friday night at the premiere, where he arrived rocking a gray coat. We spotted girls standing in line for more than an hour just to get on the waitlist for a ticket, and we heard audible gasps once inside, when Nick was spotted taking a seat toward the back with the rest of his cast. We’re not sure if they knew what they were in for. The film, based on Brad Land’s memoir of the same name, raises questions about what masculinity really means through the story of two brothers: Brad (played by rising star Ben Schnetzer) and his older brother Brett (Nick Jonas).

It starts with high school graduate Brad being brutally assaulted by two townies after leaving Brett’s frat house, which leaves Brad broken and self-loathing. Several months later, when Brad is a college freshman, Brett pressures him to pledge the same frat. Thinking he’ll find strength in brotherhood, Brad instead discovers the pitfalls of groupthink and the wolf pack mentality, which is shown through some of the cruelest hazing scenes you will ever see on screen. Later, it’s Brett who realizes the brutality must end.

At times, the guy-on-guy violence was too hard to watch. But it didn’t matter for his fans. After the premiere, when director Andrew Neel introduced the cast, nearly every phone went up to snap a picture of Jonas. Neel had to prod the audience to actually ask a question during the post-screening Q&A instead of just taking pictures.

On Saturday, Storm Jonas doubled down. First, Nick did interviews with press all day to promote the movie, including with us inside the Acura Lounge, where he employed a very serious tone in discussing how he wants to contribute to the conversation of redefining masculinity. He also looked sleek in the below Lamarque coat.

“This issue is something I became more aware of in the making of the film,” he said. “I didn’t have a college experience. My exposure to fraternity hazing and brotherhood would have come from my brothers and our experience. It also came from the TV show Kingdom that I do about an MMA [mixed martial arts] gym, where there is a pecking order and a competitive nature there that probably stems from insecurity.” (Seasons one and two of Kingdom are available to stream on directv.com.)

“In doing this, I was willing to go on this journey and be as much as a student in the message and the questions we’re asking as much as a vessel to tell the story and make the questions known,” Jonas said. “To have this story told is very important. I’m hopeful that the conversation continues to evolve and any of my fans that go to see it leave asking a lot of questions and a different world view.”

Being known as a brother also helped inform his character. “I see a lot of my brother, Joe, in Brett, and at times my take on Brett is a reflection of Joe,” he said. “My brothers pushed me to have a good time and then would draw it back. The moments of enthusiasm and excitement that turned quickly to apologies were almost too real for me.”

While the subject matter of the film prompted our discussion to be deeply serious, just a few feet away, it was as gleeful as could be as girls gathered in anticipation outside the door hoping for a glimpse of the star. When he eventually came out, the squeals were piercing.

His fans actually followed him wherever he went that day—up and down Main Street visiting nearly every media lounge, outside his Goat cast dinner, and finally, to Tao late night, where he and Joe partied the night away with friend Sophia Bush.

But as fast as the two Jonas Brothers dominated conversation in Sundance—both for the film and for just being some of the most sought-after sex symbols of Generation Z—it was soon over. Like any storm, they moved on, leaving a much calmer, quieter town in their wake. 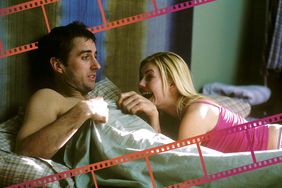