Two years ago, Jenna, 34, remembers having sex at least once a day — if not more — with her now fiancé. More recently? They were happy if they were in the mood twice a week.

While she knows part of the shift has to do with simply becoming more comfortable as a couple, she feels there's more at play, and it has everything to do with the content of their news alerts.

"It's the way the world has changed, to be honest," says Jenna. "At least once a day, there's some sort of crisis, and it's really hard to get in the mood when you see a tweet or headline or news segment about something horrible happening." Her fiancé agrees. "We're on the same page. We've had conversations lately about how it feels Putin has done more than just interfering with the U.S. election — he's interfered with millions of relationships, too. I can be absolutely certain Putin never came up on a date two years ago."

Heidi Klum on the Downside of Dating Someone 17 Years Younger

As the political landscape has gotten increasingly complex, the 24-hour news cycle has invaded every aspect of our lives. A 2017 Stress in America survey by the American Psychological Association found that 63 percent of Americans believed the future of the nation was a very significant source of stress, above perennial topics like work and money. And stress is a major known sex-drive killer. Since Trump announced his bid, party politics became the cause of many a breakup, according to a research study from Wakefield Research, and 2016 was dubbed "the year of anger" by several reporters. With so many tumultuous feelings swirling in the ether, is it any wonder that we're feeling less than amorous in the bedroom, too?

When Ashley, 34, looks back at her relationship milestones, she pinpoints them to various political crises. There was her 2016 proposal, which took place amid endless headlines about the Republican National convention, then her July 2017 honeymoon, a cross-country drive during which she and her new husband were tuned into the rise and fall of Anthony Scaramucci as White House Communications Director. The week Ashley found out she was pregnant, she was overcome with emotion about migrant children being detained. "There's no way to separate politics from relationships," she says. "The political is personal. It's all intertwined."

To be clear: The recent intrusion of negative, depressing, incendiary, or scary news is disturbing and crucial to pay attention to. It compels people to take action, call their senators, and become activists for causes like gun safety and immigration. It's not a solution to simply turn off your notifications until further notice and get naked with your SO to pass the time — but is there some way to reconcile being a responsible citizen with being in a happy and sexually thrilling relationship?

"Sometimes, I feel guilty that we're enjoying our lives, when we're safe, happy, healthy … it feels like we don't deserve it," explains Ashley, about how the news cycle has cast a shadow over her relationship — as well as her libido. "How can I feel in the mood when I know people are suffering?"

Her feelings aren't uncommon, and they're ones that may affect women more than men: A 2012 study found that negative media exposure increases stress in women in a way it doesn't in men. This difference can create even more tension; while men may feel similarly disturbed by the news, it doesn't necessarily get in their head (or between the sheets) in a way it may for women.

"Stress affects us physically and emotionally, so it's no surprise that it can have a huge negative impact on our sexuality as well. If you're worried, worn down, frustrated, discouraged, or hopeless, those feelings are probably going to follow you into the bedroom," notes Jared DeFife, PhD, a clinical psychologist in the Atlanta area. But, DeFife says, men may have an easier time compartmentalizing, meaning that their anger and frustration about the state of the union doesn't necessarily affect the state of their unions.

This manifests differently for everyone, of course. For some women, metabolizing news-induced stress can result in an increased desire for human contact. "Stress [coming from the news cycle] may trigger compulsivity and addictive behaviors, and those issues can affect a person's sex life. Some people may become less sexual in a compulsive/addictive cycle, while others may become more sexual," says Robert Weiss, a sex addiction therapist and CEO of Seeking Integrity.

"I definitely think sometimes, 'Eh, the world's ending, so why not date or sleep with this person?'" shares Jessica, 24. "I think there truly is this feeling, like, we're living in the end times, so might as well live it up." Jessica notices that when she's hooking up with a date, both of them often turn to their phones immediately after sex. "It's like, okay, no disasters happened in the last 15 minutes? Great."

But Jessica says that even though she and her partners have shared some uneasy laughs about political upheavals (or presidential tweets), the news has made her act in ways she may not have if she hadn't felt anxious about a national or international crisis.

"When you've read really upsetting stories or seen really scary video footage, then you just don't want to be alone," she says, explaining that she's gone home with a few men in almost direct response to distressing headlines. "When I see a really upsetting news story, I want to find my tribe. But I'm a single woman who lives alone, so I don't have this big group … so, yes, I have had sex with a guy mainly because I'm scared and feeling existentially exhausted." And that's the thing: The news cycle may tank your libido, or it may rev it up, but whatever it does, it's a surprising intrusion on intimacy.

So, whichever camp you fall into, what can you do?

Willow, 30, who's been dating her boyfriend for five years, was desperate for an answer. "If I see something upsetting on the news, I can't enjoy a date night. I can't have sex. I feel like I have two options: Live in a cave or just realize that this is the new normal." Willow, who already suffered from an anxiety disorder — which DeFife points out can make the impact of stressful news even harder — says that she found herself frequently experiencing crying jags in bed with her boyfriend, so she ended up going to see a therapist. "I think I had some underlying issues, but the news cycle didn't help me," explains Willow, who found medication and talk therapy helpful. She also began tuning out the daily news, preferring to read aggregations in newsletter form instead. "My boyfriend and I are both pretty emotional people, so our discussions tend to get really dark, really fast. We were both so angry, so we ended up just getting angry and on edge at each other all the time."

Now, Willow and her boyfriend rarely discuss the news. The shift initially felt unnatural, she says. "What's going on in the world is everything, so I feel like, how can we have the luxury of being selfish? But then I realized that it wasn't like talking was doing anything." Instead, the couple started donating monthly to several causes they support, and Willow decided to explore activism paths with a friend. "My friend is a lot more upbeat, and can pull me out of my dark place in a way my boyfriend can't." The shift has made her more active politically and paid off in her relationship. "I feel like we're more present. We're less on edge."

And yes, the sex is better.

Relationship Red Flag You're Missing, According to a Lawyer

DeFife says Willow's fix is a smart one — and one many couples can emulate. The key is creating boundaries. First, remember: It's okay to be an engaged citizen and have a healthy sex life. Willow says that when she made a committed effort to take action daily — she signed up for DailyAction and now receives push notifications from them, not from her former news sources — she felt less guilty about tuning out when she was with her boyfriend at night. It's not that you should ignore what's going on around you. But filtering and focusing, like channeling your passion for politics into a local race, or diving deep into several key issues, can be less all-consuming and more productive.

Second, it's time to kick Rachel Maddow, Sean Hannity, or whoever your political commentator of choice out of bed. Keep your phone on airplane mode — or put your phone to bed — and avoid watching the news before you go to sleep.

Finally, it's the same old advice you've heard for ages, no matter who the president has been. Unplug, unplug, unplug. Will you miss something if you're without Wifi for 48 hours? To be honest, you probably will. But unless you're a news leader or the leader of a country, the chances are unlikely the news will directly affect you right this second, and if it does, you can bet someone will tell you. "People are sometimes spending more time scrounging through the daily headlines than they are diving in to the latest breaking news going on in their partner's life. We've got to learn how to better moderate our exposure to these unrelenting news streams of stress," says DeFife. Take a beat to actually be present when you engage with your partner; then engage with the news.

As cheesy as it sounds, taking stock of what you are thankful for in your life — even that amazing O your partner gave you while your alerts were off — can help you gear up to face a difficult environment. And, sometimes, when your Twitter feed makes you want to scream, "touch more," says DeFife. "Physical touch and comfort from your partner is an incredible, all-natural stress reliever."

Jenna and her fiancé have now made their bedroom a "Putin-free" zone, and she's noticed a difference. "We basically de-politicized the house," Jenna says. "We had this funny political cartoon [of Putin and Trump] on our fridge, but then I realized we're subconsciously seeing that 10 times a day. We took it down. Magazines go in a face-down pile. We talk politics, but we do it on the subway, not at dinner." And it's working. "We're not at everyday status yet, but we're more playful. We can be politically engaged and have a sex life. Everyone can."

So yes, take political action — but don't ditch the affection. We're all too well aware that a hug can't save the world, but alongside action plans, senator calls, marches, and volunteering, it can't hurt either. 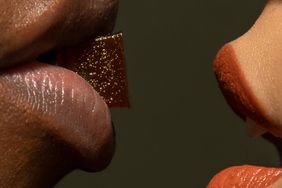