The crisp white shirt is the unsung hero of every woman's wardrobe. And nobody knew that better than the late Italian designer Gianfranco Ferré.

During his 30-year career, Ferré was regarded as the "architect of fashion" best known for reinventing the wardrobe staple countless times. And now, the largest exhibition of his striking pieces is making its U.S. debut at the Phoenix Art Museum's show, The White Shirt According To Me. Gianfranco Ferré."

And these aren't your average button downs. The 27 designs were created in every imaginable fabric from organza and taffeta to satin and tulle, some with elaborate detailing like mother of pearl, lace, and leather. "Ferré took this classic, a foundation of both male and female attire, and infused it with high fashion," says Dennita Sewell, the curator of fashion design at the Phoenix Art Museum. "By taking one concept and reconstructing it over and over again, it reveals the sophistication and depth of his creativity and deep understanding of design."

A Museum Exhibit Dedicated To Barbie Is Now Open In Milan

Also on display are 33 cases of original drawings, advertisements (Julia Roberts famously starred in his 2006 campaign), and editorials that were pulled from the Ferré Foundation archives. Exquisite large-scale photos of the shirts were taken in an X-ray style by photographer Leonardo Salvani as well. "They show all of the hidden details and seaming and give a greater understanding of the original techniques that the designer used," says Sewell. "It illustrates how Ferré arrived at so many ideas based on a single concept."

"The White Shirt According To Me. Gianfranco Ferré" is open now through March 6, 2016 at the Phoenix Art Museum. Visit phxart.org for more information. 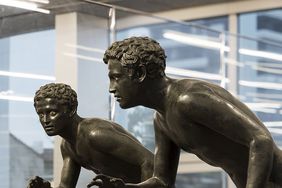