It's been quite a year for The Mindy Project. After not being renewed by Fox after three seasons, things were looking gloomy for the beloved show. But then Hulu swooped in and gave it a full season order, meaning we have another 26 episodes of amazing Mindy Lahiri fashion to look forward to. And now with Mindy (SPOILER ALERT) becoming a mom on the last episode we will get to see a whole new side of her. Though if you think she will become more lax about her style now that she has a little one, you would be quite wrong, says the show's Emmy-nominated costume, Salvador Pérez. We chatted with him a bit about what to expect for Mindy's style for Season 4 and some of the looks she has sported so far.

Go Big or Go Home
Basically just expect a lot more fashion. Pérez said after his nomination he felt some pressure to really step it up. "It's a lot more costume design, a lot more designer pieces, within my budget of course!" One of those designer pieces Mindy will sport in the next episode is a Vivienne Westwood jumpsuit. But still expect good old staples from places like Net-a-Porter, he says.

See How Mindy Kaling Recovered from a Hilarious Wardrobe Malfunction

Super Fashionable Mom
And if you think Mindy will be focused less on style with little Leo to take care of, well you don't know Mindy. Pérez told InStyle, "With Mindy, now it's 'Since I'm not working I have much more time to do my hair and be more fabulous.' She will be very chic. As we were with her maternity style, it will continue to be very Laura Petrie-inspired. She will be a mom in heels."

We saw her awesome mom-to-be chicness this week in particular when she went into labor on a stuck subway. Though she was panicking, she looked gorgeous in custom-made orange dress with a coordinated orange tweed jacket with a Peter Pan collar.

Dream Closet
This was a bit of a departure from the sparkly LBD number she wore in the premiere in her fantasy sequence in which Joseph Gordon-Levitt was her husband (above). With its sparkles and deep neckline, that dress did seem like it was straight out of a dream. "We call that neckline 'The Mindy.' She [Mindy Kaling] loves it. It looks good on her, so why not have a little fun with it?" He has made custom designs with that neckline for Kaling for the People's Choice Awards and The Oscars.

In general for Season 4, Pérez says he is taking more risks. "I'm having a lot more fun with the show. There were things before [in seasons past] that I was like, 'Can I do this?' and now I'm like, 'Let's just do it!'" Sounds good to us! 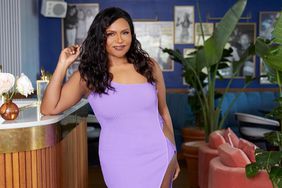 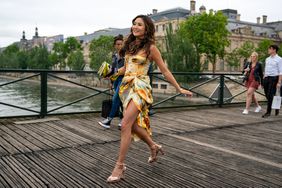