Mindy Kaling and New Girl Zooey Deschanel (in Naeem Khan) stuck together at the 2013 Winter Television Critics Association Tour in Pasadena, which includes panels and talks announcing news from networks like FOX, NBC, and more. FOX just announced that next season of Mindy's show The Mindy Project will include a guest appearance by Seth Rogen, who is currently starring in The Guilt Trip. See more stars at this week's biggest parties in the gallery! 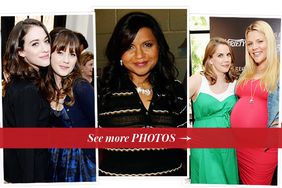