Miley Cyrus is back! After a two year hiatus from music the former teen sensation has changed her style, her hair and her sound. Cyrus took the stage at Wango Tango in one of the most low-key outfits she's worn onstage in in years. The star wore a white tank top and white jean cutoffs with boots and a little white bandanna around her neck, and she packed a lot of action into the appearance!

VIDEO: 9 Miley Cyrus Quotes to Get You Through the Day

She let her ombré locks hang down around her shoulders while she danced around the stage singing her new song, "Malibu". This is a complete change from Bangerz-era Miley, who would perform hip hop-inspired songs in next-to-nothing outfits with close-cropped bleached hair. Miley's only buzzy accessories this time around were dangly earrings that spelled out "Liam" (as in Liam Hemsworth, her now potentially on-again fiancé) and the engagement ring he gave to her in 2012. Lots of talk about those earrings on the Internet, ICYMI...

For the performance, Miley's stage was filled with colorful balloons very similar to the recently released music video for her new song. She also carried a basket of wildflowers as she sang. Cyrus became emotional during the lyric "I never would've believed you if three years ago you told me I'd be here writing this song." She told the crowd, "I never would believe that I would be here surrounded by all of you loving people. I want to thank you guys from the bottom of my heart because I really do feel like this is a dream come true." Miley also covered her godmother's song "Jolene" and had the audience help her sing along to one of her own hits, "We Can't Stop."

Earlier in the day Miley's sister Noah Cyrus played a set and at the end of her performance, Miley brought out a huge birthday cake for the girls' mother, Trish. "Before I go, it's my Mamma's birthday so I would really like to bring her out on stage and sing her Happy Birthday," said the youngest Cyrus sibling. 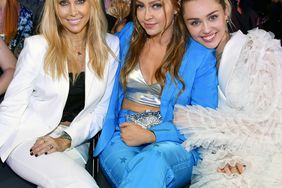 No Couple Meant More to Zillennial Theater Kids Than Zac Efron and Vanessa Hudgens
It's Been 10 Years Since Rebecca Black Released "Friday," and the Internet's No Kinder to Young Girls