Miley Cyrus and Liam Hemsworth are sparking wedding rumors once more. The couple was spotted enjoying a day date on Georgia’s Tybee Island on Saturday. But Tybee is more than just a fun place to go jet skiing—it’s actually the spot where they first met (and later fell in love).

The couple met on the set of 2010’s The Last Song while filming on Tybee Island. They started dating and then got engaged before breaking it off in 2012. But fear not, this real-life love story has a happy ending: They reconnected in 2015 and are now engaged once more. But are they married? Let us examine the latest evidence.

Cyrus and Hemsworth were spotted jet skiing together in Georgia over the weekend, even cuddling up to pose for photos together on the beach. The Hannah Montana alum was wearing her engagement ring from Hemsworth as well as a pretty diamond band, sparking rumors that they may have secretly tied the not. In other photos, a band can also be seen on Hemsworth’s ring finger.

The actor is on location in Georgia to film his new movie, Killerman, and his fiancée visited him on set for a fun excursion.

So did they get hitched? The two have been spotted wearing those rings in the past, so we can’t say for certain that they’ve tied the knot. However, we can say for sure that they make one cute couple. 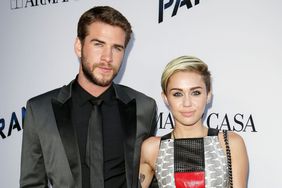