The rekindled romance between Miley Cyrus and Liam Hemsworth appears to be as strong as ever. Strong enough, even, to engage in a rare moment of PDA. After a Tuesday night dinner date at Soho House, the couple was spotted walking hand-in-hand through the streets of New York City looking very much in sync.

For the causal night out, Cyrus, 23, wore a psychedelic pair of high-waist peg leg pants with a simple black top and a denim jacket. The season 11 Voice judge accessorized her look with a Kardashian-esque choker, red slip-on Adidas sandals and the 3.5-carat engagement ring Hemsworth gave her back in 2012. Beside her, Hemsworth, 26, looked handsome in a maroon Bally bomber jacket, a black shirt, and black pants.

Hemsworth has been in the Big Apple promoting his new film Independence Day: Resurgence, in which he stars alongside Jeff Goldblum.

After calling off their engagement in 2013, fans were thrilled by rumors that the on-again couple had renewed their engagement in January. Since then, the love birds have been spotted spending a lot of time together—from Austrailia to N.Y.C. Engaged or not, they're definitely feeling the love. 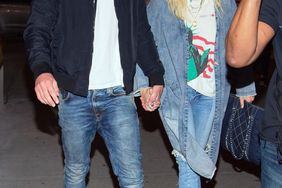 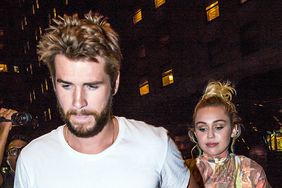