Miley Cyrus isn't the only one who misses Liam Hemsworth when he's away—their sweet pup Dora does, too!

On Sunday, a seemingly-homesick Hemsworth shared a black-and-white photo of himself and Dora, his beloved Irish Wolfhound mix, which he captioned simply, "#thuglife." Cyrus even commented on the 'gram writing "Lucky to have you [fuzzy] babies to cuddle"

Shortly after, Cyrus chimed in again with her own ode to Dora, posting a series of selfies with the giant pooch. "We miss you @liamhemsworth!" the pop star wrote alongside the pics. "(Dora's morning yawns are more like ROARS)," she added.

Cyrus and Hemsworth rescued Dora, who's named after the Nickelodeon show, from Wylder's Holistic Pet Center in Los Angeles back in 2015, sparking rumors that they had rekindled their romance after ending their engagement two years earlier. Those rumors, it turned out, were true. The couple—luckily for Dora—is still very much "on" again.

We know if we were Miley (and Dora), we'd miss Liam too! 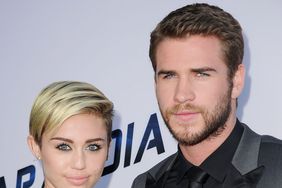 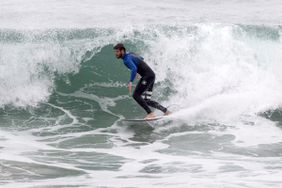