It was a magical night for InStyle's cover girls Mila Kunis (in Dolce & Gabbana), Michelle Williams (in Prada and a Kate Young for Target clutch), and Rachel Weisz (in Victoria Beckham), when the cover trio premiered their new film, Oz The Great and Powerful at El Capitan Theatre in Los Angeles. This premiere focused on grand entrances—instead of a red carpet, stars walked down a yellow brick road and, in the biggest arrival of them all, star James Franco descended from above inside a hot air balloon, much like the way the wizard enters the colorful world of Oz in the film. The movie opens nationwide on March 8, and in the meantime, you can get the inside scoop on all of the stars in the March issue of InStyle, on newsstands—and downloadable for your tablets—now.

Plus, see more of this week's biggest parties! 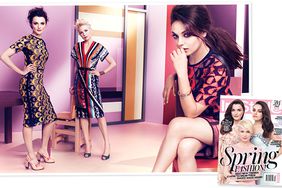