Following the arrival of Mila Kunis and Ashton Kutcher's baby boy Nov. 30, the parents of two kept mum on details of their little one's arrival, including his name ... until now.

The mom and dad revealed the name of their son on The Ranch star's A Plus site Friday, with the site's team announcing in a post that the littlest Kutcher's moniker is Dimitri Portwood.

"All couples consider a number of potential baby names before landing on the perfect one, and Kutcher and Kunis were no different," the post read. "During a November appearance on Conan, The Ranch actor said that he had, at one point, considered naming his soon-to-be-born son Hawkeye after the mascot of his alma mater, the University of Iowa, but Kunis recommended that the pair look into alternatives."

"Today, A Plus is happy to announce that Dimitri Portwood Kutcher was born at 1:21 a.m. on November 30, weighing 8 pounds and 15 ounces."

This is the second child for the couple, who welcomed daughter Wyatt in October 2014. Since Wyatt's birth, Kutcher and the Bad Moms star have kept her out of the public eye, and it looks like we won't be seeing Dimitri anytime soon either.

In a phone call with A Plus, Kutcher told the site, "We'd like to allow our kids to make their own choices on whether to have a life in the public eye or not. We don't want to make the choice for them." 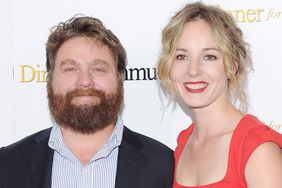