Mila Kunis and Ashton Kutcher keep their private lives to themselves. They don't post photos of their children's faces on social media, and are only rarely seen with them out in public. Still, when it comes to discussing her latest motherhood happenings, the Bad Moms star couldn't help but open up, saying she feels "so lucky" to have their children in their lives.

"I have an 11-month-old and a 3-year-old—I have tiny little humans," Kunis told her Bad Moms co-star Kathryn Hahn in the cover story for Net-a-Porter's digital magazine, The Edit. "Ashton and I wanted kids so bad; we were so ready to be parents. We were able to have this little family the way we wanted, and I'm so grateful for it and it's the one thing that I can't control."

As they chatted, Hahn reminisced about how she could see the bond between Kunis and her now 3-year-old daughter Wyatt as they filmed the original Bad Moms. "[Wyatt] was on your lap, she was so little, but the way she held you with her little paw was just like … [gasps]," Hahn said. "It's so beautiful to see; your [bond] is so strong. We're so lucky we have a gig in which we're able to have [our kids] with us."

"So lucky," Kunis, who is also mom to 11-month-old Dmitri, replied. "Our kids have a crazy fun life where they visit at work. I take it for granted; I take so much of my life for granted. Both my husband and I try daily to remind ourselves how truly lucky we are."

To see The Edit's full interview with Mila Kunis, go to net-a-porter.comor download the free Edit app at the App Store and Google Play.

And they're lucky not only with their family lives but also with the success of their careers. Kunis said she has "been in the business" for 25 years, and started acting when she was just 9 years old. Even so, any anxiety she has doesn't come from the stresses of the industry. Instead, she gets anxious making sure that her family is protected.

When Hahn asked her if she ever gets anxiety, Kunis said, "My anxiety was this morning in traffic for 15 minutes, trying to have a conversation with my kids while they were getting ready. That's my anxiety, my babies!" 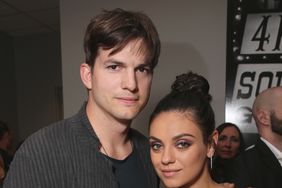 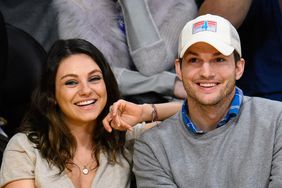