ICYMI, a lot of people were upset this week after finding out actor Mark Wahlberg was paid $1.5 million to reshoot scenes from All the Money in the World, while his female co-star, Michelle Williams, took home a mere $80 a day.

After being criticized by peers and fans, Wahlberg sought to make the situation right yesterday by donating his wages from the reshoot to the Time's Up movement, which was founded to combat sexual harassment and pay inequities in the entertainment industry. On Instagram, the 46-year-old actor explained, "I 100 percent support the fight for fair pay and I’m donating the $1.5 million to the Time’s Up Legal Defense Fund in Michelle Williams’ name.”

That's a pretty huge gesture, and so it's no surprise that Williams responded with her own statement.

"Today isn’t about me. My fellow actresses stood by me and stood up for me, my activist friends taught me to use my voice, and the most powerful men in charge, they listened and they acted," Williams said, according to Entertainment Tonight. "If we truly envision an equal world, it takes equal effort and sacrifice."

"Today is one of the most indelible days of my life because of Mark Wahlberg, WME and a community of women and men who share in this accomplishment," Williams continued. "Anthony Rapp, for all the shoulders you stood on, now we stand on yours."

In turn, actor Anthony Rapp, who first came forward with allegations of sexual misconduct against Kevin Spacey, responded to Williams' words. On Twitter, Rapp wrote that he was "very moved" by her statement.

It's wonderful to see actors supporting each other—and the Time's Up movement.

AJ McLean on "Love Song Love," Fatherhood, and His Decades-Long Affinity for Painted Nails
It's Been 10 Years Since Rebecca Black Released "Friday," and the Internet's No Kinder to Young Girls 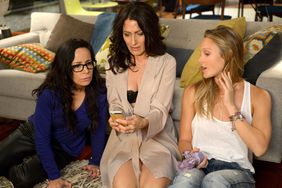