Michelle Rodriguez is standing up for what’s right.

In June, the 39-year-old actress took to Instagram to directly call out the fact that there aren’t enough female roles in her blockbuster Fast and the Furious franchise.

“F8 is out digitally today, I hope they decide to show some love to the women of the franchise on the next tone,” she wrote, adding, “Or I just might have to say goodbye to a loved franchise. It’s been a good ride and I’m grateful for the opportunity the fans and studio have provided over the years."

Several months have passed and the star, who portrays Letty Ortiz, is make sure her voice is heard. Earlier this week, TMZ asked Rodriguez if calling for more women in the film is still a top priority, and the answer is obviously yes.

“My path is about female empowerment, and if I’m feeling a little stagnant in that area in what I’m doing for a living, then I’m gonna have to move on. Evolve or die baby,” she said.

We’re completely on board with her. In fact, very few female actresses (think Jordana Brewster, Charlize Theron, Gal Gadot) have joined the cast, much less interacted on camera. It’s time to change that, people. 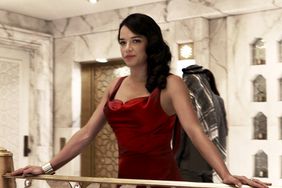