Michelle Obama made the final pre-holiday stop on her Becoming book tour with a fittingly uproarious welcome at Brooklyn’s Barclays Center to a crowd of nearly 20,000.

Moderated by quintessential N.Y.C. gal and actress Sarah Jessica Parker, Michelle dove into topics explored in her memoir, including the transition to civilian life after two terms in the White House.

“Barack and I spent 8 years trying to operate in complete perfection, because we didn’t feel like we had a margin for error — which we were used to, because oftentimes when you’re the first or only, the bar shifts a little,” she said of being the first black First Family. “The bar gets set, you meet it, you exceed it, they move the bar.”

Of course, it’s difficult to touch on the Obama years without some comparing and contrasting to our current administration. “We’re watching it right now,” Michelle said of the same concept. “The bar’s just swingin’ … It’s a totally new bar, never seen this bar before. But when we were in office, our bar was very different: not getting indicted, telling the truth, and sharing …”

Although the Obamas had a couple of months to prepare for their departure, Michelle said the morning of the inauguration was a very overwhelming time.

“My daughter’s friends wanted a sleepover the night before, so I have a house full of crying girls with their stuffed animals, trying to get their last breakfast in, and I was like, ‘You all have got to go. We are leaving.’ So I’m trying to get them out the freight elevator, pushing the kids out, the Trumps are coming, the Tiffanys box … and I’m just like ‘Whoa, what is going on?’ And then sitting through an inauguration that didn’t look anything like ours — there was no representation, there was no diversity on that stage, and it saddened me, so there were a bunch of highs and lows. We were excited about leaving, we were excited about the next step, we were excited about being part of a peaceful and productive transition, but by the time we got on that plane and I closed the door, I weeped because — to Barack I said, ‘That was so hard.’ And it was the first time I could say that out loud and let the exhaustion just wave over me.”

After a much-deserved vacation, Barack and Michelle returned to Washington, a decision she says many questioned. “People were like run girl, run — get out! GET. OUT. Another Get Out situation,” she joked in reference to the 2017 film. “Don’t look at the teacup. Don’t look at the spoon …”

When choosing designers to wear, Michelle made a pointed decision to thrust those most deserving and otherwise obscure into the spotlight — as she did with the now-household name Jason Wu.

“For me, it was not just did I love what they designed, but it was also what kind of people were they, and how did we send a message of diversity and supporting American designers. The first report, no matter what I was doing, was what color are my shoes, which would never have happened to a man. We’re still doing that to women … No matter what we’re doing, we’re still checking out what are you wearing, and how’s that, and who designed it. And you can get frustrated with that, or you can flip it on its head. We used this platform to uplift some new, young designers who normally wouldn’t get this kind of attention, because you can change their lives.” 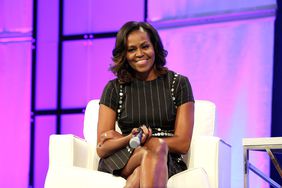 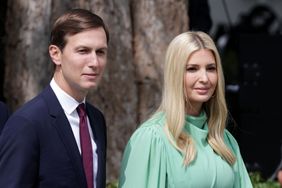 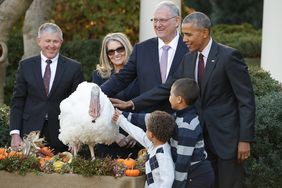 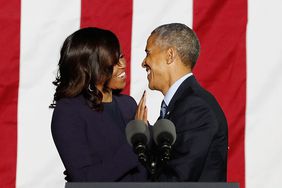