Melania and Barron Trump Have Officially Moved to the White House

The day has arrived: Barron and Melania Trump have officially moved into the White House, nearly five months after Donald Trump took office as president of the United States.

The First Lady announced the move to her Twitter followers in a post on Sunday evening. “Looking forward to the memories we'll make in our new home! #Movingday,” she captioned an image from a White House window looking out on the manicured lawn.

Donald, Melania, and Barron arrived together at the White House on Sunday. Barron, 11, stepped out with his mother and father in a blue tee with “The Expert” emblazoned across the chest, jeans, and New Balance sneakers. Melania, 47, stood by her husband’s side in a pair of tan wide-leg pants, a simple white tank, and patterned pumps, a camel-colored tote in her hand. Donald, 70, wore a navy suit and cobalt blue tie as he held his wife’s hand and walked across the lawn.

Surprisingly, Barron’s arrival at the White House marks the first time since 1963 that a president’s son has occupied the home—John F. Kennedy Jr. was the last to do so. 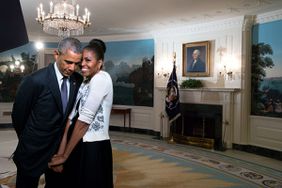