Taking a break from work counts as a celebration, right?

Prince Harry and Meghan Markle probably didn't expect their second wedding anniversary to be during a global pandemic, but according to Entertainment Tonight, the former senior royals will still be having a celebration, though it's probably more low-key than they'd planned on. ET spoke to royal expert Katie Nicholl, who explained that aside from having to stay at home, the couple most likely will spend their special day away from their screens — and there's no greater gift than that.

Of course, they've got little Archie to take care of, too, and Nicholl notes that the Sussexes will more likely than not just be spending a quiet day together with a little bit of reflection on everything that's happened in the past year, including their big decision to step away from their roles as senior members of the royal family.

"Well, it is their second wedding anniversary, but coming in the middle of a lockdown as you might expect, it will be a quite quiet affair," Nicholl said. "I'm told it will be a family day. Perhaps a moment for a bit of reflection on what has been a pretty momentous past year. No big gathering. They certainly won't be going out. They can't go out."

As for the festivities, Nicholl predicted that Harry and Meghan will just spend the day together and enjoy spending time away from their phones and computers. She didn't reveal any specific plans, but insisted that anything that would be happening would be "small and intimate." Given the current situation, that's not a stretch.

"I would say a small and intimate family gathering over anything that has been specially planned for the day," Nicholl said of the couple's plans. "I'm told by sources close to the couple that they just want to enjoy each other's company, spend the day together. They will probably go offline, and they are working really hard at the moment, so I think it will be a day for perhaps switching their computers off, not having too much screen time and just enjoying being a family together."

One inside tip that Nicholl dropped included some information about how Harry and Meghan are enjoying their time away from the spotlight. She said that they'd grown accustomed to having a full schedule of royal appointments. Now that they're in quarantine and in Los Angeles, they've slowed down and sources say that they're really enjoying that newfound lifestyle.

"One of the things I was told by a friend of the couple's is that they actually are enjoying the slightly slower pace," she says. "They are busy and they are doing quite a lot behind the scenes, but you know, this is a couple that tends to operate 100 miles per hour. I think they're enjoying the lockdown and the fact that they've been able to take a bit of a breather. It's been a very, very busy year for them, and I think this is a moment to just take a breath, reflect, and I think that's what they'll be doing on their anniversary." 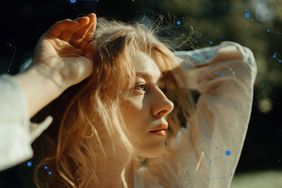