According to Billy Eichner.

It seems as though there’s a royal protocol for everything related to Prince Harry and Meghan Markle (though the Duchess of Sussex has been known to break the rules on several occasions). But those guidelines also extend to others, as actor Billy Eichner learned ahead of The Lion King premiere in London on Sunday, July 14.

During a recent appearance on Jimmy Kimmel Live, Eichner revealed that he received an email detailing the ways in which he should greet Prince Harry, should they meet on the red carpet. “They’re very intense about it,” he said. “I’m not kidding. You're supposed to say, 'Your Royal Highness.' You can't speak until your hands are in a handshake with his. My plus one…they said he had to stand behind me and not speak unless he was spoken to.”

Naturally, such restrictions would make anyone nervous. “I completely freaked out, although they were very, very nice and totally chill and down to earth, and lovely,” the actor explained.

And Eichner apparently wasn’t the only celeb who was feeling the jitters prior to shaking hands with Meghan and Harry. Beyoncé, who made Twitter waves for hugging the Duchess, was also reportedly a little anxious before the big introduction. “Prince Harry and Meghan Markle came, and Beyoncé was there, and Sir Elton John was there,” Eichner recounted to Kimmel. “And I was there, randomly. And it was great, and we were all kind of nervous, even Beyoncé.”

Butterflies aside, it seemed as though Queen Bey enjoyed meeting Meghan just as much as the internet loved their friendly hug. The singer-songwriter shared several photos on Instagram of the moment she greeted the Duke and Duchess, much to fans’ delight.

According to Entertainment Tonight, the warm fuzzy feelings were shared all around. “[Meghan and Harry] were really, really thrilled to meet her, as told by a palace source,” royal expert Katie Nicholl revealed to ET, adding that she thinks Bey got “special treatment” by the royal couple, given the embrace she received by both. “Hugging a royal, no, it's not standard protocol,” Nicholl added, explaining further: “There's a lot of sort of very tactile chemistry going on with Beyoncé with her hand around Meghan's lower back, and also with Harry's two kisses for her as well — certainly not what we usually expect of royal protocol.”

Well, there you have it. Everyone gets nervous sometimes — even royalty like Meghan, Harry, and Beyoncé herself. 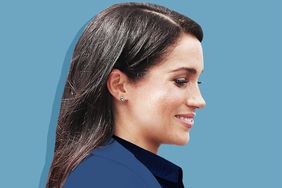