Is Meghan Markle and Prince Harry's Dog's Name an Homage to the Commonwealth?

Late last month, Kensington Palace announced that there was a new addition to the royal family. No, Meghan Markle and Prince Harry didn't announce a baby, but they did bring a new pup into the palace. And now, the royals have officially released the dog's name and it could be seen as a tribute to one of the countries of the commonwealth.

According to Harper's Bazaar, the Meghan and Harry adopted a Labrador. Markle brought her other dog, a beagle named Guy, with her when she moved from Canada, and it looks like her canine companion will have a friend of his own. The dog, which was a rescue, is named Oz, which is a common nickname for Australia.

It may be a coincidence, but it's pretty fitting as the couple readies for their very first royal tour together to Australia for the Invictus games and visits to New Zealand, Fiji, and the Kingdom of Tonga.

Royal biographer Sally Bedell Smith broke the news to the Daily Mail and adds that Kensington Palace's social media outlets haven't posted any images of the new dog just yet, though Markle's now-deleted social media feeds had plenty of snapshots of her other pets. Smith adds that Oz will "divide [his] time between the palace and their country home in the Cotswolds." That means that Oz and Guy will be around for plenty of royal events.

Markle's other dog, a Labrador-Shepherd mix named Bogart, was deemed too old to make the trip across the Atlantic when she moved. So, he's living with friends back in Canada. Bazaar notes that Markle's furry pals have already become part of the royal family. Guy was spotted sitting beside the Queen before Markle and Harry's wedding. 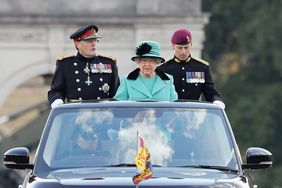