Meghan Markle Just Stepped Out in London for a Shopping Trip—Has She Moved In with Prince Harry?

Suits star and prospective princess Meghan Markle stepped out in London on Tuesday, amidst reports that she’s preparing to move in with her royal beau, Prince Harry.

Markle, 36, blended in on the streets as she did some shopping in the English capital. The actress and former lifestyle blogger stepped out in a pair of sleek flared black trousers, a black SMYTHE Handknit Ruffle Sweater, and a slate gray moto jacket for the occasion, bundling up with a large gray pashmina. Despite the gloomy London weather, Markle donned a set of tortoiseshell shades and further accessorized with pointy-toe black boots, and a black handbag. She wore her dark strands tied back in a low ponytail.

While the world awaits an engagement announcement from Kensington Palace, we’ll allow our royal appetite to be sated by Markle’s adoption of Prince Harry’s hometown—she looks every bit the true Londonite! 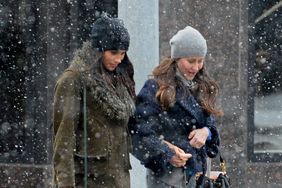