Rumors have been flying about Meghan Markle and Prince Harry's close relationship (They might be moving in together! They might getting engaged soon! They might already be engaged!) and now it looks like Markle has yet another connection to the royal family—only this time, it has nothing to do with her beau.

The Suits actress and Kate Middleton—who is expecting her third child—seem to have similar fashion sensibilities. And that became abundantly clear when Kate stepped out in a dress that looks just like an outfit that Markle once wore—but with a twist.

Back in 2012, Markle attended the A More Perfect Union: Stories of Prejudice and Power event in West Hollywood, Calif., in a dark lace scalloped neckline dress of her own. Aside from the slightly different shade, the only noticeable difference between their looks? Markle's short hemline versus Kate's floor-sweeping design.

If Markle and Prince Harry's relationship continues to blossom, we'd bet that lace dress won't be the only thing these two have in common.

Who knew Kate and Meghan shared such similar wardrobes? 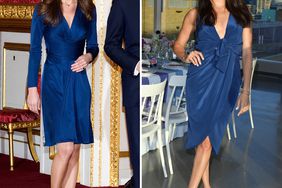