Meghan Markle and Prince Harry's visit to the University of the South Pacific Suava in Fiji was full of firsts: the Duchess of Sussex gave a royal speech to students and she wore flowers in her hair.

Stepping out for her latest appearance during the couple's 16-day tour of the South Pacific, Markle gave her signature messy updo a fresh twist — literally. Instead of pulling her hair up into a loose bun at the nape of her neck, she styled it in a French twist. Her hair was parted in the center, with two face-framing tendrils left out. Markle accessorized the updo with fresh white and yellow flowers.

Even though Markle switched up her go-to hairstyle, this new look still had an effortless vibe. The bobby pins she used to secure the updo in place at the crown of her head were completely visible (The Duchess is just like us!).

Markle isn't the only celebrity to wear flowers in her hair — Emma Stone recently wore roses in her hair at the premiere of her new film, The Favourite.

This is just one of the unexpected styles Markle has worn on her first royal tour. Verdict's out on whether or not any of them are going to replace her beloved messy bun. 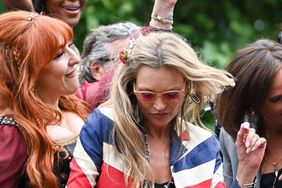