Is it because you’d like to stitch together the suit you didn’t wear to the wedding you didn't attend? Is it because your years spent as a lighting director for General Hospital and Married… with Children inspired an interest in fashion? Is it because you’re single-handedly trying to sabotage everything your gorgeous daughter Meghan Markle has worked so hard to manifest? Sigh.

Page Six reports that apparently, Thomas — father of Meghan, 2018’s Unofficial Provocateur of the Year, royal pain in Buckingham Palace’s arse — is launching … a clothing line. Yes, the man that can’t stop speaking to tabloids about Markle and Prince Harry; the man that faked a photo shoot of him trying on a tuxedo for the royal wedding; and the man that recently claimed he actually never did receive an invitation to his daughter's big day is now choosing to compete against purveyors of clothing like, say, Ralph Lauren, Gap, Men’s Wearhouse, or Kohl’s.

Page Six references a tweet published by none other than a fellow problematic member of the Markle family, Meghan’s estranged half-sister, Samantha Markle. “So excited about my father’s new #clothing line for men! Will keep you posted!” she wrote on her private account.

Samantha, who’s also continuously bashed Meghan in the media and reportedly has plans to join the U.K.’s Celebrity Big Brother, has tweeted things that feel a little off-kilter before, so who knows how legit this clothing line could be. But still. Why does Mr. Markle suddenly have a passion for fashion, and who would want to purchase his goods anyway?

Slapping the "Thomas Markle" label on your back could imply that you stand for everything that he’s become known for (lying and bashing Princess Diana? Um, no thanks) and while we bet that the poor man is a great soul who’s just struggling to cope with his daughter’s newfound fame … Thomas, could you just not?

Okay, okay, let's believe for a second that it really is Mr. Markle’s ultimate wish to become a fashion designer and create show-stopping fashions, then who are we to judge? 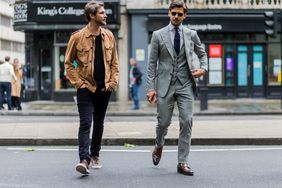