What is Matt LeBlanc's Net Worth?

Hollywood legend has it that Matt LeBlanc only had $11 in his bank account when he auditioned for the role of Joey Tribbiani. The actor's come a long, long way since then. But with all the Friends reruns, the hosting gigs, and his return to TV, what's the one-time starving artist (those same Hollywood legends say that the first thing he got with his first Friends paycheck was a hot meal) worth today?

Before his time in a fictional New York City, LeBlanc did time with bit parts on TV, including roles on TV 101, Married with Children and Vinnie and Bobby. Like the rest of the Friends cast, LeBlanc started off earning around $22,500 per episode in the early seasons of the show — but that number skyrocketed to a record-setting $1 million toward the end of the show's run. That role makes for the meat of LeBlanc's net worth, which Express reports is $60 million.

Following his run on Friends, LeBlanc was the only star to snag a spin-off. With Joey, LeBlanc banked an additional $15 million, even though the show only lasted two seasons. That lead to a stint on Showtime, where he basically played himself on Episodes. But it's not just sitcoms that helped LeBlanc add to his net worth. Though only the most die-hard car fans probably tuned in, LeBlanc hosted the show Top Gear in the U.K. That gig snagged him $2 million. Not too shabby for riding around in some of the most expensive cars in the world — and being a gearhead himself, it was probably more for pleasure than business. As for the big screen, he appeared in both Charlie’s Angels films as well as a 1998 remake of Lost in Space. While the movie received tepid reviews, it was a big deal for LeBlanc, who proved he could make it on the big screen.

And as for critics who said that the Friends cast was overpaid? Like Lost in Space haters, LeBlanc had an answer for that, too.

This Is Matt LeBlanc’s Plan for His Upcoming Retirement

It's great that LeBlanc has managed to keep headlining various projects, but fans know that the biggest chunk of that $60 million comes from Friends and its subsequent reruns. Thanks to a generous contract, the cast still rakes in about $20 million per year from repeats. That's certainly not chump change, but with a gig on CBS's Man With A Plan keeping him busy, his account balance should be on an upward trajectory for a long time. 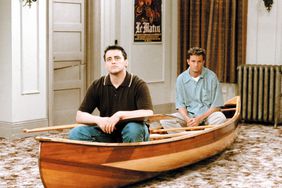