Marc Jacobs has another leadership role on his plate—or, actually, in his glass! Diet Coke just named the Louis Vuitton designer as its creative director for 2013, its 30th anniversary year. Following in the bubbly footsteps of previous fashion-focused DC creative directors Jean-Paul Gaultier and Karl Lagerfeld, Jacobs will create a line of limited-edition bottles and cans, as well as take charge of the Sparkling Together for 30 Years campaign. "Diet Coke is an icon… and I love an icon," Jacobs said in a statement. To launch his partnership, he stars in a film for Diet Coke, appearing shirtless as an homage to the brand's iconic Diet Coke Hunk ads from the 1990s. Watch the clip here! 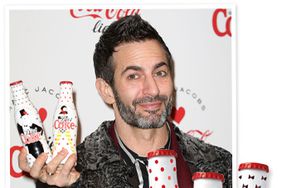 These Are the Diet Coke Bottles Marc Jacobs Designed