Mandy Moore is an engaged woman, and she wants the world to know. The This Is Us star stepped out in Brentwood, Calif., on Tuesday—the morning after her boyfriend of two years, Taylor Goldsmith, popped the question—and she was not hiding her gorgeous new sparkler.

The actress met friends for lunch at Caffe Luxe wearing a menswear-inspired plaid blazer, distressed jeans, and oversize sunglasses, but the only accessory that we had our eyes on was the understated yet totally stunning engagement ring on her left hand. The round diamond solitaire totally vibes with Moore’s simple yet elegant personal style.

The 33-year-old has been dating the Dawes frontman for just over two years, celebrating their second anniversary with a sweet Instagram post over the summer. “The best 2 years. Never not smiling with you, T,” she captioned the pic.

"I love my life right now. I’m in a wonderful relationship and I have a job that I love and I’m so challenged by and satisfied with. That kind of makes all the difference," the actress shared during her keynote speech at Saturday's Create & Cultivate conference for female entrepreneurs.

Moore was previously married to musician Ryan Adams. The two announced their split in January 2015 and finalized their divorce last summer. Moore told People in July that the split hasn’t turned her off the idea of marriage.

PHOTOS: The Most Breathtaking Celebrity Engagement Rings Ever

“I would definitely get married again,” she said. “My life has sort of taken unexpected twists and turns professionally and personally, but overall my journey is the reason I am here today and I feel fulfilled by everything that happened.” 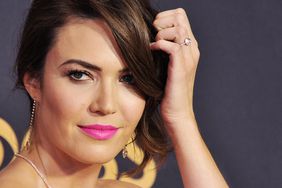