Who knew being evil could look so fashionable? To celebrate the release of Disney's highly anticipated film Maleficent—in theaters now—several fashion and beauty brands have released collections inspired by the visually stunning movie, which reveals the untold story of the iconic villain (played by Angelina Jolie) from the 1959 classic animated Disney film Sleeping Beauty.

We've rounded up our favorite collaborations inspired by the film to get you in the fairytale spirit:

1. David LernerTo inject a bit of Maleficent into your everyday wardrobe, designer David Lerner teamed up with online retailer Shopbop on a chic collection inspired by the glamorous villain. Out today, the six-piece capsule ($98-$275) is reminiscent of Jolie’s title character, featuring an all-black palette and edgier take on Lerner’s must-haves items. The line includes a coated minidress, lizard embossed leggings, a leather detail camisole, ruffle dress, and coated lizard tunic, all which feature cool metallic and mesh details fit for any wardrobe, available now on shopbop.com.

2. MAC CosmeticsMAC teamed up with the film's makeup artists Rick Baker and Toni G. to create a 14-piece line inspired by the movie that includes a one-size-fits-all shadow palette, liquid liner, brow pencil, nail polishes, faux lashes, a trio of red lip products actually used on Jolie during filming, and more. "The collection of colors we chose were based around Old Hollywood, because Maleficent was from that time. In the Disney original, she was green with purple eye shadow, but because of the storyline, we decided to stick with neutral tones and a beautiful red lip," Toni G. tells InStyle. "We wanted to bring a sense of classic beauty that was also very sexy into the collection." Find MAC's Maleficent collection ($18-$44) at MAC locations and maccosmetics.com.

3. Stella McCartney KidsDisney teamed up with Stella McCartney on an adorable children's collection in the spirit of the film, which features a mixture of enchanting everyday wear and mythical costumes. "I was always a huge fan of Disney and I grew up watching all the films just like most kids did," says McCartney. "With this collection I wanted to play on the rich character traits within the film; the sense of innocence and darkness." The Maleficent by Stella McCartney Kids capsule collection, available on stellamccartney.com, features eight playful styles for boys and girls ages 4 to 14. From fairy-print t-shirts and dragon sneakers to pieces adorned with wings, the collection truly captures the energy of the movie's fairytale characters.

4. HSNHSN brings the stunning story of Maleficent to life in an exclusive assortment of items designed in the theme of the film. Top HSN designers including Naeem Khan, Giuliana Rancic, Ranjana Khan, RJ Graziano, and more created pieces across the fashion, jewelry, beauty, and home categories that capture the magic and drama of the beloved tale. Shop the curated collection now on hsn.com.

Want more Maleficent? Get all the details on Angelina Jolie's wickedly awesome look from the film in our gallery! 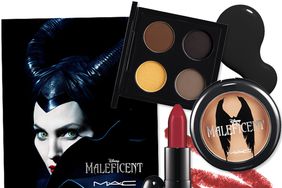