Another season of Mad Men came to an end last night in emotional, sad, and optimistic ways. All season long, costume designer Janie Bryant worked to match the wardrobe on the series to the storylines carried out through the dialogue, an effort no more apparent than last night's final scene—when Peggy landed in a pants and swiveled around in Don's chair. "I really felt like she should be wearing pants in that scene," Bryant told InStyle.com exclusively. "She has such a progression for the whole season, and the last episode when her whole flirtation with Ted comes to a head, she goes through all of the emotions. At the end, she’s in command and control of her own destiny, and pants spoke to that." It epitomized the approach she has taken to design all season, with the emotions of script dictating her every wardrobe decision. "It all starts with the script and what information the script gives me," she said. "And it was so good." Click to see what she had to say about the rest of the season finale costumes.

Plus, it's your turn to ask the questions! Tune in to @InStyle's Twitter feed tomorrow at 1 p.m. to ask Janie Bryant of Mad Men your own wardrobe questions. She'll be answering all things Mad Men, style, and confidence tomorrow. Just Tweet #AskJanie with your questions! 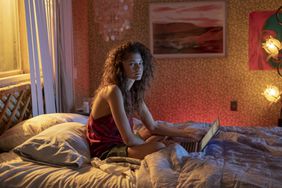