Lupita Nyong'o has never been one to shy away from bright colors, which is why we were so excited to see what outfit she chose for the red carpet screening of her new movie, Queen of Katwe at the BFI London Film Festival on Sunday.

The 12 Years a Slave star stunned in a colorfully striped bustier under sweeping baby blue trousers with a slightly ruffled high waist, both by Rosie Assoulin. In true Lupita Nyong'o fashion, the actress wore a colorful headwrap that perfectly matched her ensemble, along with gradient Rebecca de Ravenel bon-bon earrings. After wearing a lavender dress to the movie's Los Angeles premiere, Nyong'o kept with her cool-hued color scheme, and we're especially loving the single bow-tied strap, adding in even more texture to the playful outfit.

The movie tells the story of a young girl from Uganda who learns how to play chess and lifts herself and her family from poverty in the slums of Katwe, an area in the Ugandan city of Kampala. Nyong'o plays the girl's mother, telling us "really about a girl that pursues her dream against all odds," while at the TIFF InStyle portrait studio. "My hope is that other young women see this and know that you don’t have to be from a big place to do big things.”

"This is not just an African story," Nyong'o added. "It's a universal one. You can discover ingenuity and genius anywhere." The movie is a can't-miss and is playing now in theaters across the U.S. 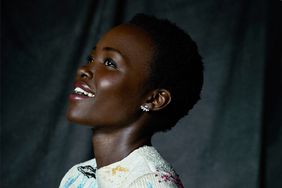 Queen of Katwe’s Lupita Nyong’o: "You Don’t Have to Be from a Big Place to Do Big Things”