The Look of VH1's Do Something Awards: Stylishly Sweet

Last night, VH1 premiered its first annual Do Something Awards, a ceremony which honors celebrities, athletes and common folk who have effected positive changes in the world. The big winner was 23-year-old Jessica Posner, who collected the $100,000 prize for her efforts in helping combat gender inequalities in Kiberia. We were truly taken by all of the charitable efforts highlighted at last night's event (there were definitely a few tears), which was hosted by Glee star Jane Lynch. And even though Tyra Banks and Christina Applegate each took home statuettes (for Do Something With Style and Do Something Kick Ass for Survival Awards, respectively), it was Megan Fox who won our award for most stylish star: She rocked an Azzedine Alaia frock in a muted palette of peaches, nudes and caramels. Of course her accessories were right on par: She expertly matched her dress to a pair of sky-high suede Brian Atwood platform pumps. And Kristen Bell also turned heads in a metallic, light as air confection from Georges Chakra Couture that featured super-sweet lace detailing. For more of last night's fashions, click through our gallery and tell us who looked best in the comments section below! 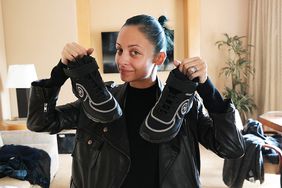