Lily-Rose Depp Shows Off Her Sporty Side at LAX

Lily-Rose Depp has had a whirlwind couple of months. From promoting her new film, Planetarium, with co-star Natalie Portman at the Venice Film Festival and the Toronto International Film Festival, to attending Paris Fashion Week and sitting front row at Chanel, for which she's a brand ambassador, the rising star is certainly making a name for herself in both the entertainment and fashion worlds.

Depp arrived back home in Los Angeles on Wednesday, touching down in LAX wearing a comfy, sporty-chic outfit with her blonde hair pulled back in a messy bun and cat-eye sunnies. Depp's heather gray leggings featured navy blue panels on the shin for added texture, and she paired them with an oversize, vintage Bulls sweatshirt and matching gray and red sneakers.

The 17-year-old daughter of Johnny Depp and Vanessa Paradis (of whom Lily-Rose is the spitting image) looked ready to be back home after her busy couple of months. Multiple fashion shows and movie premieres might not be part of the average teenager's schedule, but clearly, Lily-Rose is no average teen.

Lily-Rose Depp's Craziest Day On The Set of Planetarium

Depp's next film project, Moose Jaws, was recently announced, although no release date has been set. Hopefully Depp doesn't stay out of the spotlight for too long; we love getting inspired by her seriously on-point street style. 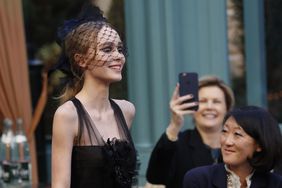 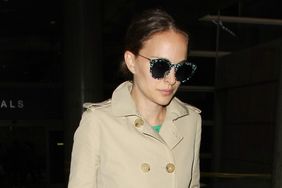