If there's one thing Leonardo DiCaprio loves, it's helping the environment. The actor is a UN Messenger of Peace, after all, and recently spoke at the organization's New York headquarters about the importance of doing something about climate change. So it comes as no surprise that when he's in the Big Apple, DiCaprio's preferred mode of transportation is the city's bike-share program, Citi Bike, a fact her proved once again on Wednesday when he was spotted cruising the city on one of their signature blue bikes.

Dressed in khaki shorts, a blue v-neck T-shirt, a backwards UCLA cap, black slip-on sneakers, and a pair of sunnies, DiCaprio looked happier than ever as the took to the streets of Manhattan on his two-wheeler. The Oscar winner was joined by a friend, who biked alongside him for the ride.

Of course, this is far from the first time DiCaprio has been spotted on a Citi Bike—or even the first time he's done it with a female companion. In fact, Leo has been seen rolling down the city's streets on quite a few occasions, one of which was with his then-girlfriend, Blake Lively. Check out more photos of our favorite Boo Boo riding bikes in our gallery now. 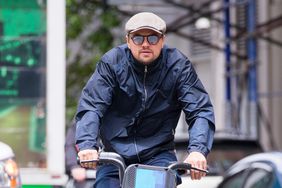 Here Are Some Photos of Leonardo DiCaprio Riding a Bike 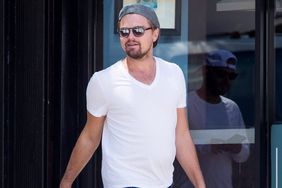 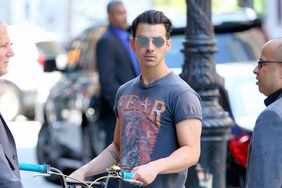