The Time 100 Gala, held to celebrate the magazine's list of 100 most influential people in the world, took over New York's Lincoln Center last night! It was quite the star-packed affair, with celebrities including Justin Timberlake and his wife Jessica Biel (both in Tom Ford), Claire Danes (in Lanvin), Girls creator Lena Dunham (in Saint Laurent), Michael Kors, and Olivia Munn (in a dress by the designer) mixing and mingling at the event. The festivities included performances by Miguel and Christina Aguilera, as well as a rousing speech by Vice President Joe Biden who asserted to the audience, "This list is unified by a simple belief that it's all about basically not being told it can't be done." Click the photo to see more. 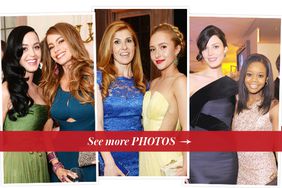