Don’t cry because it’s over, smile because it happened. That’s the motto that Lena Dunham is living by, right after her recent split from ex-boyfriend Jack Antonoff.

Following news that the longtime couple decided to part ways, the Girls creator took to Instagram Live to open up about the breakup. “I’m wearing this ring that Jack gave me, and I’ll always wear it because love is a really cool, powerful, eternal thing,” the actress stated as she showed off the symbolic piece of jewelry during the live stream.

And while the pair may have ended things romantically, the 31-year-old wants to remember happier times with the turn of the century moonstone and peridot ring, which Antonoff gifted her back in April 2016 for their anniversary.

“[Love] doesn’t have to be defined the way that we, in Western culture, define it as beginnings and ends,” she said.

We wish both Lena and Jack the best! 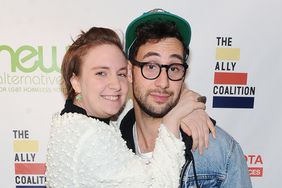