Stars like Lena Dunham (above, right), Christina Hendricks (below, left), Beth Behrs, Jane Fonda, and Beverly Johnson came out in droves Sunday evening to raise money for the Rape Foundation at the picturesque Greenacres Estate in Beverly Hills, Calif., where writer and director Judd Apatow (above, left) was honored for his outspokenness and advocacy for sexual assault victims at the organization’s annual brunch.

“It is an amazing place and it’s important that when people go through these traumatic incidents that there are people who know how to take care of them, who love them, and I think it speeds up the healing process,” Apatow, who was on hand with his wife Leslie Mann (below, right) and their two daughters Maude and Iris, told us of the organization’s Rape Treatment Center.

With her adorable dog, Tulea, as her guest, Fonda (above, center) similarly expressed how important organization’s work is. “Sexual abuse, rape, incest is epidemic. It has affected many, many people in my life—my family and my friends,” she said. “Several years ago, I discovered the Rape Treatment Center and I’m just very moved by what they do and very impressed.”

5 Things to Know from Lena Dunham's Interview with Hillary Clinton

As the event began, and guests finished up their skirt steak and arugula salads, Apatow’s friend Dunham hit the stage in a “Dunham” emblazoned black blazer to gush about the comedy mogul’s advocacy, calling him her “work brother/dad/son/work husband/dad again.”

“My love and admiration for this man is boundless,” she said. “Not only because he’s a creative dynamo, or the funniest person I’ve ever met, but because he’s a tireless advocate for women.” The Girls star moved on to share personal stories of how Apatow has helped her, adding, “When I decided to write about my experience with sexual assault, Judd is one of the people that I shared my essay with. His notes were kind and considerate and made the work infinitely stronger … He was a consistent reminder to me of something his work has always represented, which is that it’s never wrong to speak the truth.”

It was a particularly moving event, with MC and former Friends star David Schwimmer getting emotional as he told the crowd the center sees three to four new victims every day, “many of whom are children.” And guests teared up as three young women took the stage to share their stories of sexual assault, with one revealing she was raped repeatedly for years by a family friend starting at the age of eight.

With the help of the center, all three of the young women were able to bring their abusers to justice. The youngest, who wants to pursue a career as an attorney when she finishes high school, said, “Now, instead of nightmares I have dreams about my future.”

Event attendees were so touched by the program that they donated hundreds of thousands more to the organization before the day was done, a successful one indeed. 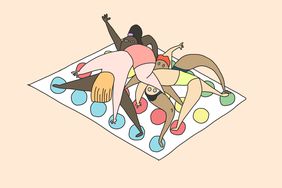