If you were a teen in the mid-2000s, there were few things you longed for: a Motorola Razr, a celebrity MySpace friend, and the real-life romance between your fave teen drama characters.

Between Sophia Bush and Chad Michael Murray, Adam Brody and Rachel Bilson, and Blake Lively and Penn Badgley, we thought at least one couple would keep our dream alive. But alas, each prospect fell apart before our eyes.

Instead, we were blessed with a crossover courtship. Gossip Girl’s Upper East Side princess Blair Waldorf (Leighton Meester) and The O.C.’s Newport Beach nerd Seth Cohen (Adam Brody) ended up falling in love, getting married, and having a daughter together.

We’re still pretty shocked by this turn of events, but Meester and Brody themselves are more surprised that we still actually care.

During an interview with Entertainment Tonight, the pair was asked if they ever “share a laugh” over their shared teen drama past.

“Occasionally,” Brody joked, “Once a year, we have a Seth and Blair day, and we dress up…” the actor quipped, eliciting a laugh from his wife.

Don’t know about you, but we’re going to break out our Penguin polos and designer headbands and pretend “Seth and Blair Day” is a real thing. 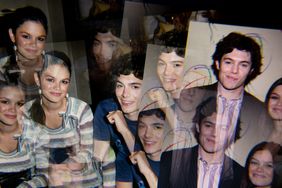